The "Media Info+" application uses a predefined View for each media file you select to view and analyze.
Thus, when you select a Video or an Audio File from inside the app or from the "Open With" or the "Share" option, the app autoshows a view that consists of three different sections:
1) The general details of the Video/Audio
2) A filmstrip of the Video to give the user an idea of the Video Story (applicable only when it deals with videos, not music files).
3) The Media Details for the corresponding video/audio file.

An example is shown below.
Important: The app can extract the Media Details for almost EVERY Video or Audio codec or format that exists, even if you don't have installed in your PC a similar codec or media player app (e.g. for not Windows standard video formats, like webm, ogg, etc..) 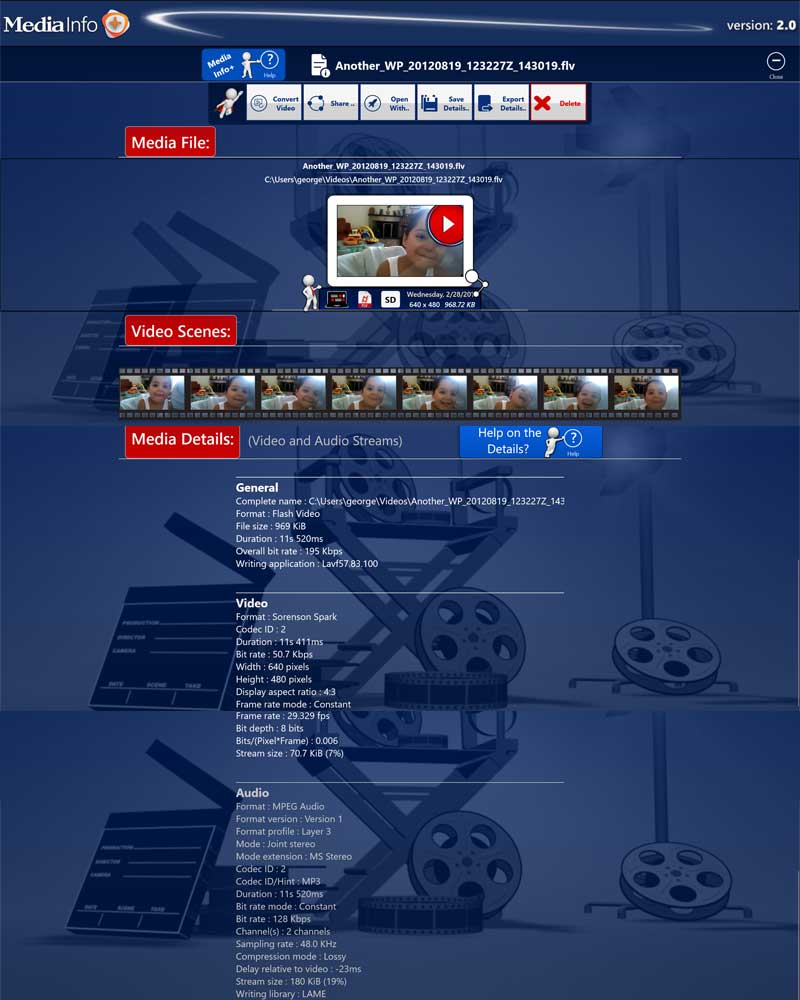 the Media Details PopUp View:
1) Media File Section (in red): Contains the basic info for the Video file
(Duration, thumb, Format, Date Created, Filename and Path).
2) Video Scenes (in red): An automatically created filmstrip from the video thumbs, with a specific time interval between them. Provided just for quick view on the Video Story.
3) Media Details: Contains a list with all the Media details that were extracted from the media file.

Here we will try to explain as much as we can from the Media Details that the app shows.
Always, the Media Details are splitted into two, three or more sections, depending on the Media Streams that are found inside the Media File. The first section with the Title "General", contains the General Media info
of the file,
Complete name: The Filename of the Media file (with the path).
Format: The Video format of the video (e.g. Flash Video).
File size: The Size of the video in Kbytes (1 Mbyte = 1024 Kbytes, 1 Kbyte = 1024 bytes).
Duration: The duration of the video. You will notice that this may differ from the duration of the audio or the video stream. This is the duration of the whole video!
Overall bit rate: As it says, the Overall bit rate (number of bits per second during playing) that the media file produces. As above, this value may differ from the Bit Rate of the audio or the video stream (they may differ). This is the average bit-rate of the whole video!
Writing application: The name or the category of the applications that was used to create the media file.
After the General Media Details, the Details for each Stream that was found inside the Media File follows. The app produces separated details for each stream.

​Important: At this point we must mention, that the usual case for a video file is to contain one Video Stream and one Audio Stream. Furthermore, the usual case for an audio file is to contain one and only Audio Stream and no Video Streams. But, there are many videos out there, that contain more than one Audio Streams inside them or more than one Video Streams. For these cases, when you want to play such a file, it's on the Media Player's responsiblity to handle this case and to provide the user with an option to select which of the video or audio streams want to view or hear. If the player doesn't provide you with such option, then the first Video and the first Audio stream will be autoselected and played.
The "Media Info+" application will display all the details for every stream it found, separated!

For each Video Stream, the Details that the app provides are as follow. Please, notice that the section starts with a "Video" Header:
Format: The Video format that is used from the codec (eg.  Sorenson Spark).
Codec ID: The Identification Number for the Codec in the Video.
Duration: The duration of the Video Stream only.
Bit rate: The number of the bits per second, during the playback. Bigger bit rates always produce a better natural feeling for the video viewer.
Width: The width of the video in pixels.
Height: The height of the video in pixels.
Display aspect ratio: The Aspect Ratio of the video (e.g. 4:3, or 16:9, etc...)
Frame rate mode: Displays if the frame rate is constant or not in the video. Usually it is constant.
Frame rate: The Frame rate. Remember, that a good video quality has at least 30 frames, per second and above. This metric is in fps, meaning Frames Per Second.
Bit depth: The more bit depth the better. This affects the number of the possible colours that the video contains for each pixel !
Bits/(Pixel*Frame) : The number of the bits per pixel on a frame (Metric).
Stream size: The size of the Video Stream in the whole Video (in Kbytes)....

For each Audio Stream, the Details that the app provides are as follow. Please, notice that the section starts with a "Audio" Header:
Format: The Audio format that is used from the codec (eg.  MPEG Audio).
Format version: The Version of the format, (eg . Version 1).
Format profile: The name of the profile of the format (e.g. Layer 3. This means that the audio stream is encoded with the MPEG Layer 3 format, the very well knonw MP3!).
Mode: The audio mode (e.g. stereo, mono, etc...)
Mode extension: The extension (if any) for the mode above).
Codec ID: The Identification Number for the Codec in the Media file.
Codec ID/Hint: The world known hint for the Codec (e.g. MP3)
Duration: The duration of the Audio Stream (alone).
Bit rate mode: Indicates if the bit rate of the stream is constant or not
Bit rate: The number of bits per second that the audio stream contains and sends to the speakers!
Channel(s): The number of audio channels that the stream contains.
Sampling rate: The sampling rate of the audio.
Compression mode: The name of the compression mode that was used during the encoding of the audio.
Delay relative to video: Indicates if there must be a delay or not when the video and the audio streams are played together, in order to achieve the synchronization between the two.
Stream size: The size of the Audio Stream in the whole Video (in Kbytes)....
Writing library: The name of the writing library that was used during the encoding of the audio.

For each Media Info, the app provides the user with many options for further actions with the Media File and/or the extracted Details:
​
The availiable options for Video Files are shown below:

Video Convert: The App will auto-launch our other free and powerful app with the name: Video Convert+ (GOLD) and it will pass the Video File as input. The "Video Convert+ (Gold) app, lets you convert any Video File from one format to any other format!). The app is provided for free of course!

Share Option: As you have already guessed, the Windows Share Charm is displayed in order to Share the Video file with other apps from inside the "Media Info+".
Open with.. Option: The Windows Open With List will be autodisplayed for the user to choose to open the Video file with another app (e.g. for playing, converting, etc..)
Save Details: Click here in order to Save the media details of the video that were extracetd in plain text. You are prompted to choose where the Text file will be saved in your hard drive.
Export Details: The app creates a TEXT file with the Media details that were found and auto-launches the Share option to send them to other people, or app!
Delete Option: Cilck here if you want to delete the Video file from your hard drive.

The app supports many features and quick links.

As we plan to expand the app in the near future and to add more and more features (e.g. create Filmstips on a Wall,etc..) , we will be very happy if you could send us your opinion for any future expansion. Just use the email support on the next page from here.

Also, you can do the same thing, if you need to clear some or all of the Media details, maybe with examples. We will be happy to provides us with feedback.
M.I.L. Team - 3D+ and more..
Vertical Divider