Here you will read extremely important info about the "Blu-Ray Player+" application, its features and its limitations. ​

The application can play a huge number of titles in Blu-Ray Movie Discs.

This means, that it supports Movie Playback from movies that are store on a Blu-Ray Disc, either commercial or not.

If you use it and you have installed our other (Free) DVD Player application with the name: "DVD Player+", then the two applications can handle together almost every Optical Disc you may have.

Please keep in mind that this initial version of the "Blu-Ray Player+" can't play directly  everything (yet). It's just a start, but we promise to increase the number of Blu-Ray titles that we can play in the upcoming versions, so stay tuned!

Thus, due to the above small limitation for some Blu-Ray Movies, it is possible that if attempt to playback some Blu-Ray films (especially the latest releases), then the Blu-Ray Player+ will fail. This is something that we are aware of and we are doing our best in order to support it in future versions of the app.

On the other hand, (together with the DVD Player+) it CAN play almost every Media Video or Audio Format that exists (over 200 media formats are supported!) among with DVD Movies, VCD discs or even Audio-CDs (commercial or not).

Running the "Blu-Ray Player+" for the first time!

The Blu-Ray Player+ doen't need any special permission in order to play the Blu-Ray Movie you have.
Just insert the Blu-Ray disc in the Blu-Ray Drive of your PC and launch the app.
You will see something like the screenshot below. Either you are trying to play a DVD Movie, a Blu-Ray movie, a VCD or an Audio-CD, the same Welcome Screen will appear, where you will see what the Blu-Ray Player+ application has identify as a Movie in your Drive.

The Movie info, trailer, etc will be autofilled. If not, then type the Movie's Title on the Movie's Extra Info on the center to identify the movie. 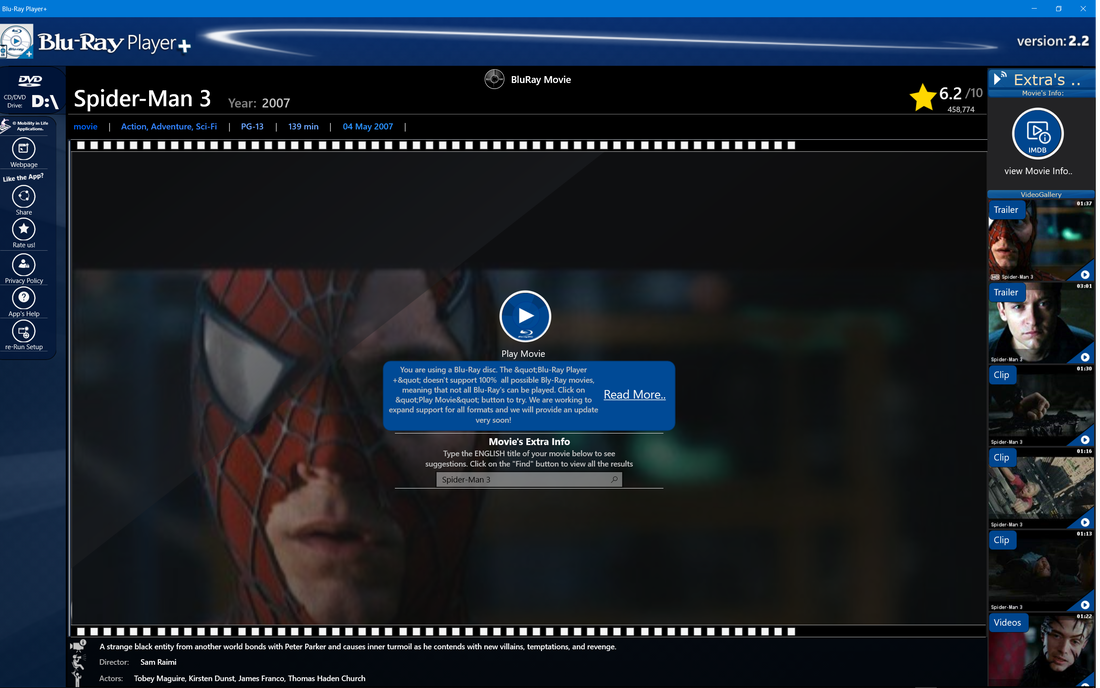 Tap on (1) to select a video or an audio file from your phone!
When the above screen opens up, just click once on the blue "Play Movie" button to start the Blu-Ray playback and the Movie will start play.

We have mention that the "Blu-Ray Player+" works together with the "DVD Player+".

So, when you insert a disc in the Optical Drive, the app will auto examine the type. If it is a Blu-Ray Movie disc, then when you click on "Play Movie" button the Playback will start. If on the other hand, the disc is a DVD Movie, a VCD, a Audio-CD or a personal CD/DVD disc, then when you click on the "Play" button, the DVD Player+ application will auto-load and start the playback.

The above procedure works vice versa. If you are on the "DVD Player+" application and you insert a Blu-Ray disc, then the "Blu-Ray Player+" will auto-load and will be responsible for the playback.

From the user perspective, you don't have to worry about the Disc Type or format. Just insert any Disc you want in the Optical Drive and one of the two apps will handle it!!!